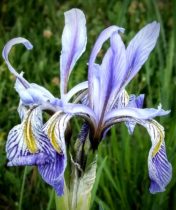 Friday June 21 – I wake up much earlier than normal and being unable to get back to sleep, I get up, make coffee in the French press, take a few moments for quiet time, and then write in the journal, sitting outside in sunlight filtering through pine boughs.

Today, to celebrate Summer Solstice, we are going for a picnic on Abajo Mountain. After the morning routine, which includes the ham radio net that Clifford checks into daily, we head up the mountain. Today we go to Pine Flats, thinking that we will go to the spot where we camped last June for Amateur Radio Field Day, but a big party is blocking the road.

Too bad, but we decide to go in further on the main road and around the bog area to see what we can find. Due to abundant snow melt and spring rains, the bog is now a pond and wild iris are blooming everywhere.

The road is above water, but muddy and Clifford has to gun Suburban to get through it. We certainly would not be able to bring Cougar up here. We find a pretty and level place to park where the road becomes a 4-wheeler trail. Clifford sets up table and chairs and gets his books out, while I wander about taking photos and gathering a few rocks for the backyard landscaping. After awhile, we have our picnic of nachos and hot tea.

By the time we are finished with our picnic, the wind has picked up and it is getting a bit chilly here on the mountain. We pack up and head out, but take time to explore a bit, finding other potential camping spots, should we decide to come up with Cougar for this year’s Field Day.

Before heading back to base camp, we drive further over the mountain to the view point where we stopped with our friends just a couple of days ago. Sage is abundant here and I want to pick enough to make a couple of sage bundles for smudging.

Back home, checking messages, I learn that my daughter Becka and her driving companion, on the journey from Atlanta to Missoula, Montana, are in mid-Wyoming and it is snowing in Bozeman, their destination. I’m guessing she is not thrilled with that! While Clifford continues with his projects – CI research and ham radio – I unload the rocks, edit photos from our outing, and play viola before starting dinner. Before I know it, bedtime has arrived; Mary Oliver poems close out the day for me. Clifford, as usual, stays up late working on his projects.

Camping at Cabin City – June 29 – July 2, 2014
Clifford left on Friday to set up camp at Cabin City, luckily getting the spot we had had before that we liked, even though there were a lot of other campers here. He came ahead of me as he wanted to set up and participate in the ham radio field day on Saturday. He had a good time in spite of the rain and learned a lot about field day. There may be some interesting correlations with the chemtrail spraying and the ham radio signal quality and strength which would also apply to such things are HAARP frequencies, electromagnetic communications and weather control.

Since I’m still working at the store (Rocky Mountain Organics in Wallace, Idaho) I was not able to join him until Sunday evening. When I arrived, he had just gotten a campfire going – very nice, as the evenings do cool off and it had been rainy here much of the time since he arrived. Just as we got ready to have dinner, it started to rain again, but luckily it was short-lived and we were able to revive the campfire and enjoy heading out again.  As the sun reached low to the horizon, the color through the overcast moisture-laden air created an unusual but lovely ambient color.

Monday was a gorgeous day… a wonderful sky with no chemtrails to mar the deep blue. An afternoon hike cross-country from our camp was sweet with the many blooming wild flowers: trillium, daisies, thistle, bluebells, buttercups, honeysuckle and others that I don’t their names.

Clifford even picked a little bouquet of daisies for me which brightened our picnic table for the duration of our stay.

In the evening I played my cello outside, to the delight of the neighboring campers whose little daughter was learning to play the cello. As the sun went down, cool air moved in and another campfire warmed our evening.

Tuesday proved to be another gorgeous day.

We drove up the road and parked at the trailhead along Rock Creek, which might be more aptly called Brush Creek. Even though our entire hike was along the creek, we seldom saw it due to the dense brush. As we hiked, we saw signs of wildlife: elk and deer tracks in the muddy spots on the trail and recent bear scat and many overturned rocks, a bear diligently foraging for ants. I sang a little bear song and when the thimbleberry became especially dense, Clifford got out his harmonica and played a few tunes. I have never seen so much thimbleberry; it was thick and tall, frequently as tall as me, obscurring the trail. Hard hiking for me, but at least the trail was relatively level.

I especially enjoyed the many wildflowers. In addition to the variety seen yesterday, there was also brilliant red Indian paint brush, honey suckle, delphinium just beginning to bloom, and many others.

Once we were satisfactorily hot and sweaty from hiking, we found a shady spot under a big old douglas fir where we found seat-size needle-covered rocks and a respite from the brush and thimbleberry. We enjoyed a little snack of an apple and a tortilla while we rested in the shade. The mountains behind us and across the creek from us are steep and often rock-faced. Clifford talked about some of the experiences of surveyors in these type of conditions, both his experiences as a surveyor and the experiences of others, especially in the 1800’s when the idea from the “powers-that-be” in the east ordered the surveying of the west in preparation for the settling of the land, having no idea that some of this land could not be settled. Some very hardy brave souls had taken on the task of surveying and one has to wonder how many of them were injured or died in the process.

Ice and food is running a bit low, as we had not originally planned to stay until Wednesday, but we come up with a good meal none-the-less and enjoy the evening by the campfire.

Wednesday morning – I make a little campfire, not so much because it is chilly out, but because I enjoy the comfy ambiance of it while I drink a cup of tea and write in my journal. Today we will have to pack up and head home to obligations, but we are grateful for the time we have spent here being in the outdoors and for the time to read, write, think, study, and meditate. And take photos, of course!