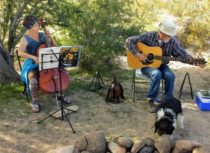 The last days at Roadrunner, January 22 to 26, include participation in Quartzfest, the ham radio gathering held just south of Quartzsite, Arizona, which is attended by several hundred ham radio operators. A variety of classes are offered every day, mostly around radios and antennas, which Clifford is interested in. He and I also attend a couple of classes geared to first aid and survival.

We spend an afternoon at the Big Tent & RV Show, a big deal here in Quartzsite, browsing the plethora of vendors selling their wares or services. While open-house viewing of RV’s is a big draw for most folks, we are not interested in that so much, being perfectly content with our Cougar.

We get together with my brother Rollie to play bluegrass music a couple of times and one evening we go to bluegrass concert in Quartzsite.

Another day we go to one of the tents that sells burgers, “eating out” Quartzsite-style.

The usual activities of photography, editing, writing, and reading continue for me, while Clifford works with his radio for hours and plays dulcimer when he is not on the radio. It is a busy time for us. 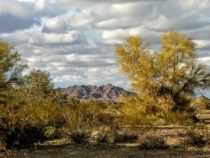 Thursday January 16-Tuesday January 21: Clifford and I arrived at Roadrunner BLM 14-day dispersed camping area south of Quartzsite, Arizona, yesterday afternoon for Quartzfest, the week-long ham radio festival. We are set up in the same spot where we were two years ago at Christmas.

We have a nice spot in the shade of a good-size mesquite tree, which also provides privacy from campers on the other side of the wash. Hooray for trees. My brother Rollie comes several times to play music with us. We also go on an outing to play music with him and his friends over at La Posa South.

Thursday we run over to La Posa South, the long-term area just up the road where Rollie is camped. He is right where we were camped with him two years ago after we left Roadrunner, and we will be joining him in a couple of weeks. Kind of fun to see the fire ring that he and I built then, as well as the rock-lined paths that lead across a small wash to the fire ring.

The next several days Clifford and I work on our various projects with special attention given to setting up antennas for Quartzfest, which starts on Sunday, which is also Clifford’s birthday. Sunday evening, Rollie comes to have spaghetti dinner with us, bringing honey and herbs from our cousin and a beautiful calendar that my sister Nancy made using my photos. A very nice special evening for all of us.

I don’t take many photos these few days here, other than a longer walk on Tuesday, appreciating the saguaros that live here, as well as the denser vegetation along the washes. I am looking forward to moving to La Posa South, which offers greater photo opportunities.

Friday January 19: Warm, sunny, and windy. Talked to my daughter Becka in Georgia. It is in the teens there and icy, so school has been canceled most of the week. Cold in Florida, also. As I talk to her, I walk about collecting rocks to make a fire ring.

Today is Clifford’s birthday and I give him an IOU for pizza at Dion’s when we make it to Santa Fe.

Rollie is at the bluegrass festival in Blythe. It is quite windy there, also, but he is enjoying the music.

Saturday January 20: Very windy in the night and we are up at 5:00 a.m. because one of the antenna lines has come loose and is slapping against the side of the camper. We fix it and then go back to bed. By time we get up, the little patio tarp that Clifford put up yesterday has blown down.

It is still windy with the slightest bit of rain – 42 drops, as Rollie would say – as I walk to the Event Center to sign us in for Quartzfest.

Later in the day, in spite of the wind, I do a walkabout for more rocks and take a few photos.

Sunday January 21: Today’s temperature: 36/60, which is cooler than we’ve seen for awhile and so windy that I don’t even go for a morning walkabout. Plenty of inside things to do: Morse code, journal, cell pics text to kids, edit “Kings and Keepers” for Ang. Clifford and I talk about options for a mobile lab so Clifford can do more with his research while we are on the road. He has been working on the Carnicom Legacy Project, but today he is focused on his ham radio.

In the afternoon, we walk down to the Event Center for Quartzfest Opening Ceremony, a rather chilly walk.

Dinner inside this evening, as there will be no eating at a campfire on these windy chilly days.

Monday January 22: Mostly sunny today, but a very chilly breeze. I go for a desert walk at sunrise for my quiet time, glad to get back to the warmth of the camper.

Mid-morning, I walk to the Event Center for the photography class, somewhat similar presentation as last year. Then back to the camper. Clifford is back and forth, also, going to radio/antenna focused presentations.

Text from Rollie. He is on his way to Roadrunner and will be here soon. I walk out to the host station to wait for him, as the huge number of RV’s here for Quartzfest has totally changed the landscape and he might not know where to find us. The hosts are not on duty due to the government shut-down. I sit and knit until Rollie arrives, then guide him through the maze of RV’s.

While Rollie gets set up, Clifford and I make a run to Quartzsite for supplies and to pick up mail. Back at camp, Rollie and Ninja come over to have dinner with us.

After breakfast, Clifford, Rollie, and I go to the RV show to look at RV’s. There is a very limited number of trailers of a size and weight that will work for us. This show is definitely catering to the BIG RV crowd. We do like one called “Retro” with its well-designed space and lighter weight. 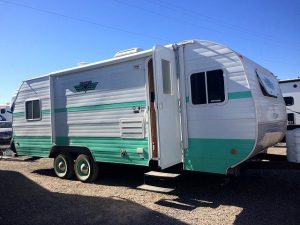 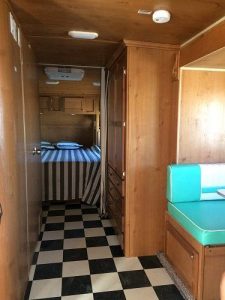 But this is a just-for-fun looking trip for us. Rollie is looking at motorhomes, definitely in the soon-to-purchase mode. We also walk through the Big Tent, which is designed to entice folks into buying something – anything – from jewelry to RV solar systems.

Back at camp, we have a quick lunch and then Rollie and I go to the pre-hootenany gathering. It is too cool in the shade for me and too hot in the sun for the guitar, but still kind of fun. Clifford is attending some presentation, also.

We have an early dinner before heading to Quartzsite for a bluegrass concert by Hardshell Harmony at Quartzsite Improvement Association venue. It is a good concert, but late by time we get home. Off to bed at midnight, feeling a bit run-down. I think the chilly dry wind is disturbing to my vata, was well as staying up too late.