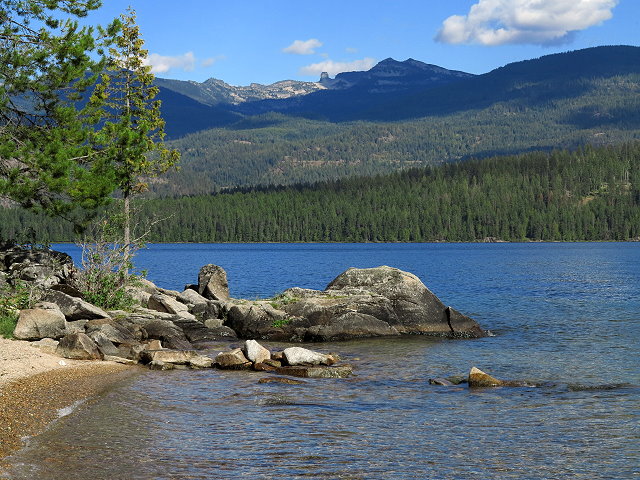 Tuesday August 23: Chilly morning – 44 degrees – but I didn’t make a campfire because I thought we were going to drive up to the north end of the lake today. But Clifford doesn’t want to spend two days in a row driving – too much interruption of his studies and research. Better to stay at camp and take advantage of the sunshine on the panels, as we have to write an article for a health newsletter. I try unsuccessfully to get hold of the dentist in Wallace – not good, but I have started taking an antibiotic that I had for such a case as this. In the afternoon, when my daughter Becka calls, I walk along the lake as we chat and take photos of the light on the water and the foliage showing signs of autumn.

The campground is nearly empty, so it is a good day to play cello. In the afternoon, after the article is written, my laptop is still charged enough that I can download photos and pick a set to edit for blogs. I’ve been tending my infected tooth with tea tree oil and clove oil, and along with the antibiotic and ibuprofin, it is starting to stabilize.

A beautiful sunset this evening, but hard to see it for all the trees to the west of the campground.

Wednesday August 24: It is 45 degrees this morning, and being August, my body thinks that is chilly, so I make a campfire and sit out with tea to write in the journal. After Clifford gets up, I make a picnic and we head out to explore the other campgrounds along the lake. Mostly they all have the same issue as Outlet Bay: not enough first-come first-serve sites and the sites too close to one another for my taste. Coming back we stop at the Ledgworth picnic area, which gives us the best views of the lake, as well as a sandy beach and a rocky outcropping.

We have our picnic and then while Clifford naps, I wade in the water and take photos of the lake.

When he wakes up, we walk to the rocky outcropping and find a rock to sit on where we can admire the lake.

A young man comes with his guitar and sits nearby; I’m sure he was playing for himself and the lake, but it felt like we were being serenaded by his lovely music.

It is too late for me to play cello when we get back to camp; dinner and cleanup wrap up the day for us.

Thursday, August 25: 43 degrees – the chilliest night so far, but I sleep in, so even though it is still brisk when I go out, I am comfortable sitting in a patch of sunlight. Texts, mostly business, take up a chunk of time today, as well as beginning editing Alex’s interesting book. His wife is an excellent proof-reader, but it is always a good idea to have a someone take a fresh look at one’s writing. Today is my son Matt’s birthday, so I give him a call and as we chat, I walk along the lake picking up bits of wood that can be added to my woodpile.

Play cello in the afternoon; I’ve only skipped playing on the days when we have gone somewhere. And before I know it, it is time for dinner, followed soon by bedtime.