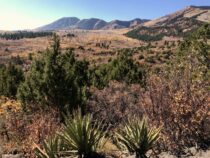 It is a beautiful autumn day, so after a quiet morning and breakfast,

we all head up the mountain for a picnic and music. After a quick stop at Indian Creek Road for photos, we head on up to Pine Flats. As the breeze has picked up some, we find a spot that is a bit protected and set up our picnic, followed by bluegrass music.

Tata makes dinner for all of us – lentil stew and cornbread muffins. It sure is a treat to have someone else cook!

I edit one of the photos from our picnic outing at Indian Creek from a few days ago and submit it to the San Juan Record, the local newspaper. They have a weekly contest and I only recently discovered that I was sending my submissions to the wrong email address.

The next outing is a geode hunting expedition. The road is rugged, a jeep road only, so I am seeing mountain country that Clifford and I could never see in the Suburban. We pick up a few rocks to take back and of course, I take photos.

When we go to the market to pick up groceries for dinner, I see that my photo submission is this week’s winner and featured on the front of the newspaper – Hooray!

Tata cooks ribs for dinner and we play music while the ribs cook. I run out of time to do dishes, but get the daily higher vibration photo done – a photo from today’s outing. A good end to the day. 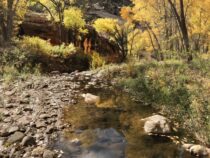 After my brother Rollie and his fiance Tata arrive in their motorhome and set up alongside our backyard fence in early October, in addition to shared meals and music, they help with a couple of home repair projects. Rollie is especially handy with that kind of stuff, and it is nice to have some of these projects taken care of.

We also walk out to US highway 491 coming into Monticello from the east, a block away, so I can show them the banners of the Community Beautification Project, four of which feature photos that I submitted.

Our next outing is a trip over Abajo Mountain to visit Newspaper Rock. For this outing, I go with Rollie and Tata in their jeep while Clifford stays in Monticello to work on the CI Disclosure Project. Our first stop is the view point on the north slope, followed by a stop at Foy Lake where the autumn foliage is especially colorful. From there we continue on to the junction with state highway 211, which leads to the southern entrance of Canyonland National Park.

However, we are only going as far as Newspaper Rock, where we, like other visitors, admire the numerous petroglyphs that were etched into the rock face at the base of the cliff hundreds of years ago. One has to wonder about the ancient tribes and the communication that still remains.

Along nearby Indian Creek, we find a small road that offers a picnic spot with a view of the creek, the colorful rocks and the autumn foliage.

This is an especially delightful stop, and we take our time enjoying our food and the scenery before heading back to Monticello.