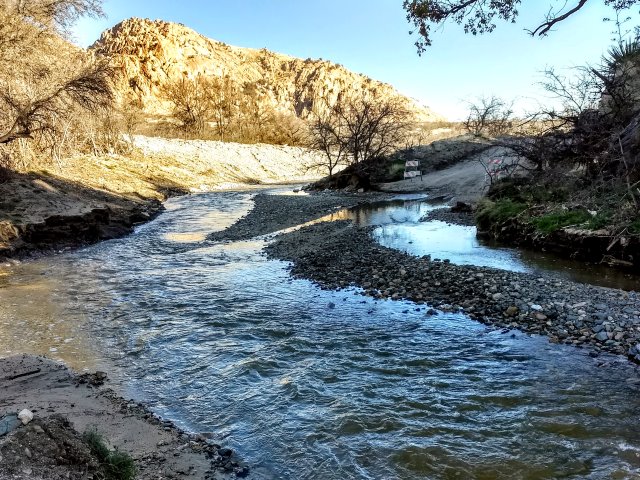 Wednesday March 13: Very windy and overcast this morning in the Dragoon Mountains of southeast Arizona.

I feel bad for the folks in tents with all the rain, and especially the family who packed up their tent last night, but couldn’t get out as the creek crossing was impassible, and spent the night in their car. They did make it out this morning, but an RVer who watched them said that it was real iffy. The young fellow in the maroon van parked near the van ladies leaves but comes back shortly. Rollie goes out to get propane and he makes it through the crossing with his little 4-wheel drive S10, but on his way back, the fellows from Santa Fe with their big Ford F350 are stuck in the crossing. Luckily, he is able to pull them out. We later heard that the Forest Service guys coming out to check on things got stuck there also. Our musician neighbors, Jerry and Sonja, stay inside their little camper much of the day. Later, Rollie and I walk down to the creek crossing closest to the dispersed camping area, usually a mere inch or less across the road, but we can’t even get across without getting quite wet – and this is not even the main creek crossing.

Other than the disruption caused by the high water, our day proceeds with the usual activities of study, editing, blog writing, email, and so on. Rollie comes over for dinner – chicken and rice – and I win a game of cribbage before doing dishes.

Thursday March 14: I go out first thing this morning to get photos of the light on the mountain moments before the sun rises and the color fades.

Rollie drives himself and me to the main crossing to see how high the water is. It is quite high, though not quite as high as when the Santa Fe guys got stuck. We meet more of the neighbors throughout the dispersed area who are walking or driving out to check on the crossing, including the fellow in the maroon van. We chat with him a bit and after awhile he decides to see if he can make it out. We wish him good luck and off he goes. The van ladies, Beth and Sally, had planned to leave today, but when I show them photos of the crossing, they decide to stay another day. I also show the photos to Jerry and Sonja, and they also decide to stay. Crossing with so much water could cause damage to rigs or vans, so almost everyone in the dispersed stays put and we don’t see any traffic to or from the campground further up the road.

In the afternoon, it is warm enough that Rollie and I play music outside with our neighbors, Jerry and Sonja. The van ladies come over, as does a friendly guy camped in a van and a guy on a bicycle. Clifford is outside playing his dulcimer, but puts it aside to be a part of the blue-grass audience. We really have quite a good time, having more musicians and an audience. Being marooned and getting to know people has been interesting.

Later, Rollie fixes Beth’s Mr. Buddy heater. Rollie is really a great camping companion, having saved our hide a time or two. Editing, journal, and posting a blog fill in the rest of the day. I fix tacos for dinner and lose the cribbage game. It was a fun day getting to know people a bit more and playing music with the neighbors. Who knows, maybe we’ll meet up with them again sometime.