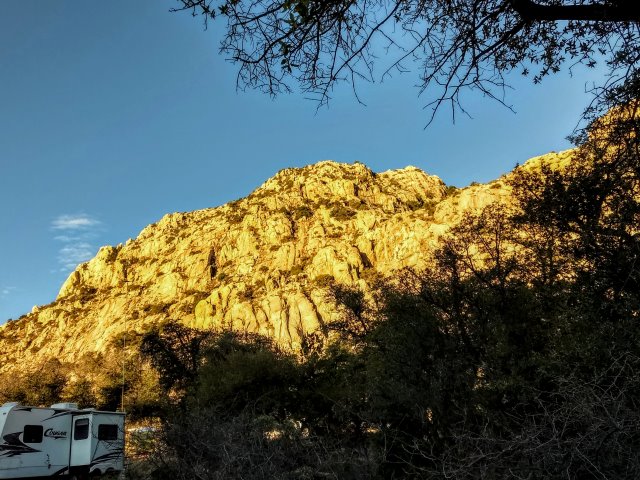 Sunday March 3: Packing up is easy this morning, as we didn’t unpack much while here at the SKP RV Park in Benson, Arizona. Our destination today is Cochise Stronghold in the Dragoon Mountains of southeast Arizona.

We are surprised when we get there to find that the dispersed camping area is full. Since we know the area, we are able to find a rather hidden spot to back into, once a road along the ravine, now mostly overgrown. It takes considerable wrangling to get in fairly level with room for the antenna and the slide out. Once we are in place, with the awning out, the table and chairs in a sandy area behind, lanterns hung up, and some of the tall dead grass cut back with scissors, the place looks quite homey and comfortable.

I go say “Hi” to the neighbors, as they were kind enough to offer to share their large space, which we declined. They are musicians, so maybe we will get together for a jam session one of these days.

In the evening I play viola while Clifford has a call with his brothers. Dinner is late, just soup and sandwiches, as I don’t feel much like cooking and cleaning this late in the day. I write in the journal while he plays dulcimer, a nice way to end the day.

Monday March 4: I am delighted to see the gold morning light, which only lasts a few minutes, on the Dragoon Mountains. This rocky section of the mountains is known as Cochise Stronghold, as it is here that the Chiricahua Apache chief, Cochise, managed to evade US soldiers for a number of years.

This morning I walk the length of the dispersed camping area, both for exercise and to see what’s available for my brother Rollie when he gets here. There isn’t much available this morning, so we’ll see how it looks later. Back at camp, after breakfast, I make coffee and sit outside with Clifford while he plays his dulcimer.

In the afternoon I drive to the regular campground a couple miles up the road to visit my camp host friend, Jimi. We have a nice visit and plan for a hike later in the week. During the afternoon, a large party leaves the dispersed area, so there is a good big spot for Rollie when he gets here.

Once he is set up, I invite him over for dinner. After dinner, I barely win a game of cribbage and then play viola before tackling the dishes. Too late to write in journal tonight.

Tuesday March 5: Down to 34 degrees this morning, a bit on the cool side, but not nearly as cold as the -16 degrees that our siblings are experiencing in Montana.

Today is a camp day, building a fire pit, playing bluegrass music with Rollie and the neighbors, sending texts with photos to family and friends, domestic chores, and in general enjoying being retired.

Wednesday March 6: As soon as I get up, I go walking, taking photos of the great morning light on the stone mountain behind us.

Today is a day of taking care of email, texts, phone calls, and trying to get a response from FB to reestablish my connection to my account. Clifford has a couple of business calls and works with his radios. Getting antennas just right seems to be an ongoing issue. It has gotten warm, 78 degrees, so we are able to do many of our activities outside. In the afternoon Rollie and I play music with our neighbors.

Dinner, cribbage, dishes, and journal wrap up the day for me. Clifford, as usual, stays up later listening to his ham radio.