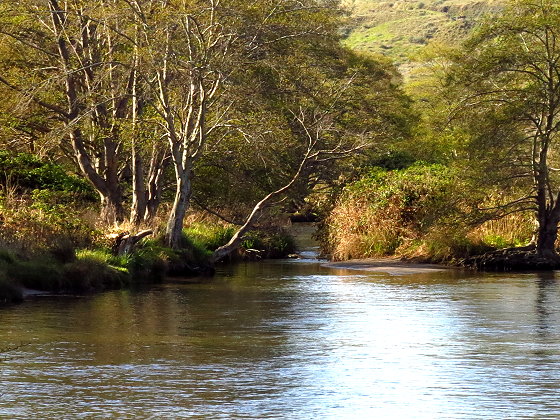 Sunday April 5, 2015: I am up before Clifford, make myself a cup of organic French press coffee, and then sit in the sunshine on the bench by the river. Today is Easter and I take these few quiet moments to contemplate who or what Jesus was or is. Somewhere amidst the baffling contradictions, there is a truth that is significant.

It is chilly out, so I decide to build a little campfire. I didn’t bring much wood and there certainly isn’t anything to scavenge here, so it is more of a token effort.

When Clifford gets up, we have breakfast and then walk up to the history kiosk at the edge of the campground. Several plaques with sketches and journal entries from Oregon Trail emigrants paint a picture of the hardships they had to endure. There is an old once-covered wagon, the ribbing now bare like the skeleton of a long-dead creature.

On the hillside above the campground, the remains of the old trail can still be seen and from the sketches we try to see where the trail on the opposite side of the river would have gone as the horses and wagons made their laborious way back up to the top of the bluff where the traveling would be somewhat easier.

Because of the difficulty of crossing the Deschutes River, many goods and supplies for building new homes had to be left behind at this point, causing further hardship to the Oregon Trail families as they continued the journey westward.

The peacefulness of the day comes to an end when Clifford starts his projects: seeing if we can get water in and out of the Pony water tank requiring opening up the bench under which it resides and feeding a tube into the tank; the water tank overfills, leaking water into the carpeting on the Pony floor; the table holding the 7 gallon water jug collapses, damaging the jug; Clifford decides to spray bleach on the Pony walls to get rid of the mildew spots and gets bleach on some of my clothes. I was less than happy about that, both from the fact that some of my clothes were damaged and that bleach is toxic to breathe so I can’t go inside for several hours. I am not a happy camper at this point, but realistically, I know things could be worse, so I try not to be a total grump about the whole business – after all, it is Easter and I am not an emigrant on the Oregon Trail. However, looking at the Pony and the lack of conventional modern conveniences, I can imagine being an emigrant. I do empathize with them, especially the women.

Monday April 6, 2015: We go to The Dalles for breakfast and then on out to the Discovery Center. This is a well- designed center that covers the geology of the areas as well as the history, including the Lewis & Clark Expedition and the Oregon Trail. It was very interesting and informative, and we both felt it was well worth the time spent there.

In the evening I begin editing photos of our time here at Deschutes Oregon State Park. It has been a pleasant place to stay, but I am eager to move on to more remote camping in the forest around Bend, Oregon, our destination for tomorrow.